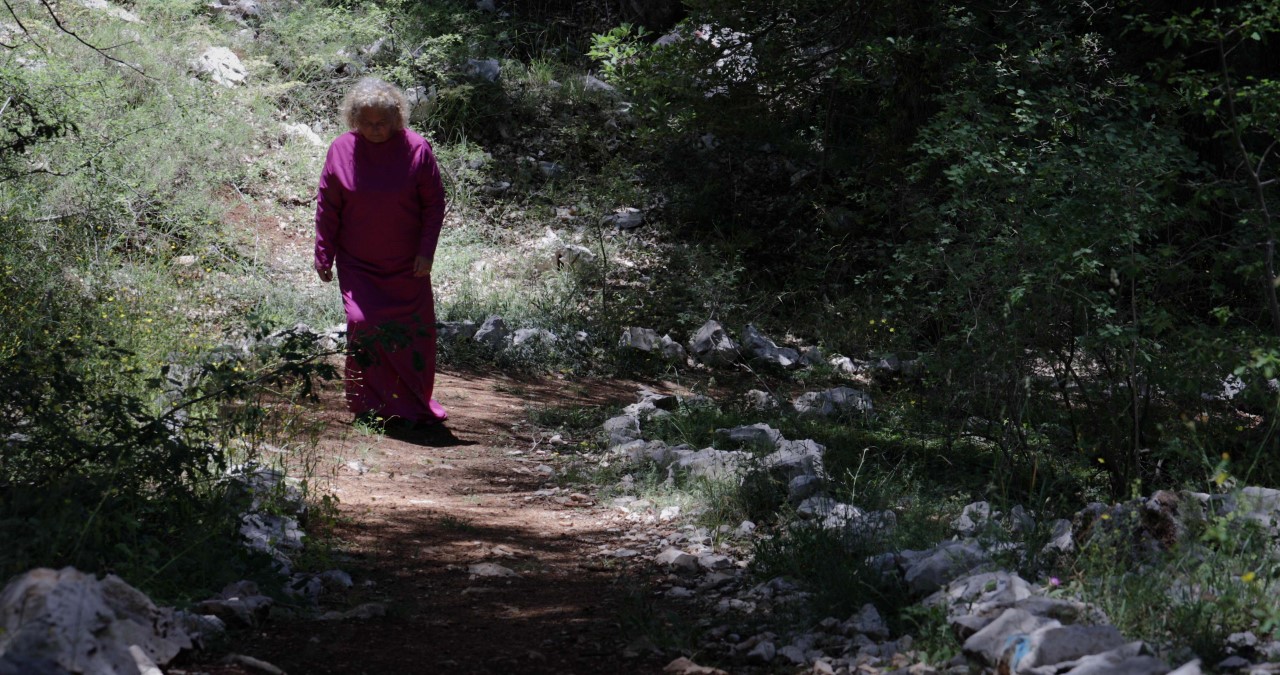 This show brings together a group of friends who are exhibiting at the Pie Factory for the third time. In 2018 they contributed to the celebration of T.S. Eliot’s The Wasteland, where the centrifugal force of the poem determined the show’s coherence. Instead of a common topic, on this occasion the musical term ‘Theme and variations’ has been adopted to suggest the way each artist tends to focus on specific themes, forms or issues as an everyday practice. These themes act as initial stimulus but also material for investigation and experimentation. This practice results in a series of sequential or interrelated works. Although each artist practises independently and differently, a number of convergences have emerged. 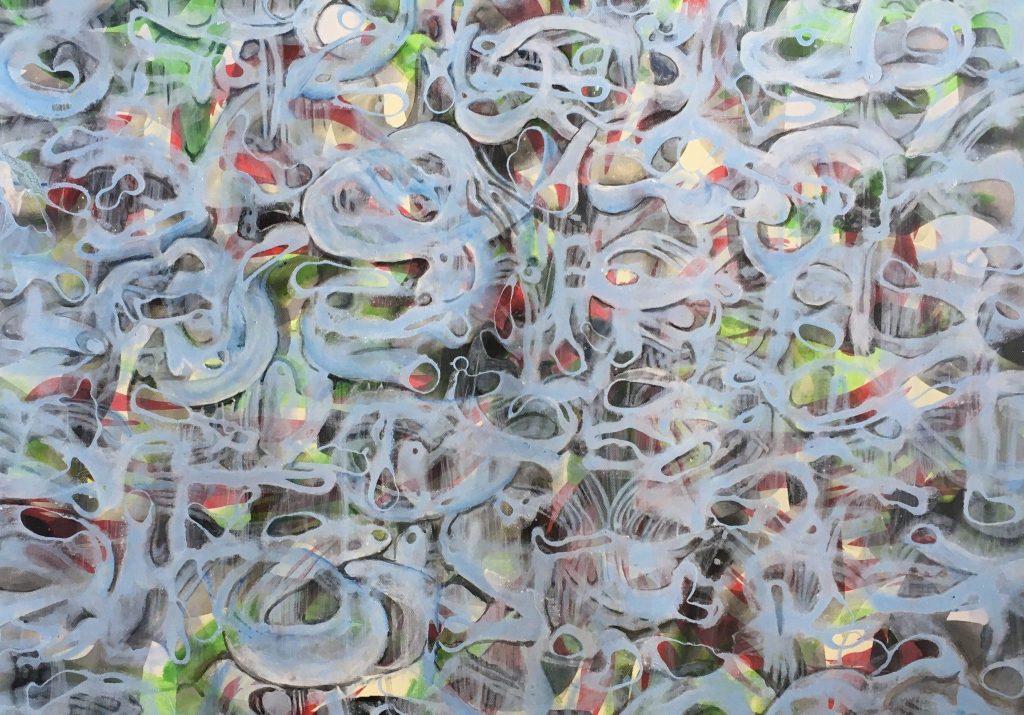 Othman Abdullah has increasingly concentrated on the process of painting in recent years. Nonetheless, traces of his earlier concerns remain: the use of Arabic text, the love of decoration, the interweaving of African and European resources, but the act of painting itself has come to the fore.

The first series shown here depends on precise weather conditions, particular shapes emerging from the process of drying in the sun, whereas the second series depends on a process of multi-layering. What both have in common is an improvisatory practice in which Othman is constantly surprised and delighted by the possibilities of paint.

Cliftonville cliff: face to face (2020)
Watercolour and acrylic on paper

Nicholas Addison has focused on two themes: the local cliffs in Cliftonville and aspects of modernism. The latter is a presented as a series of drawings and watercolours in which the myths of modernism and its heroes are subjected to parodic if affectionate questioning. These parodies touch on art historical concerns such as the absence from the literature of 19th century women in the history of abstraction to issues of appropriation.

The cliff series connects with a tradition of English, watercolour landscape, but on a scale not usual in this medium. Rather than extend the picturesque tradition, Nicholas has instead drawn out grotesque configurations. Oddly, he recognises that the cliffs connect with his other theme, modernism, for these works seem to imitate aspects of cubist painting, as if nature were imitating art. 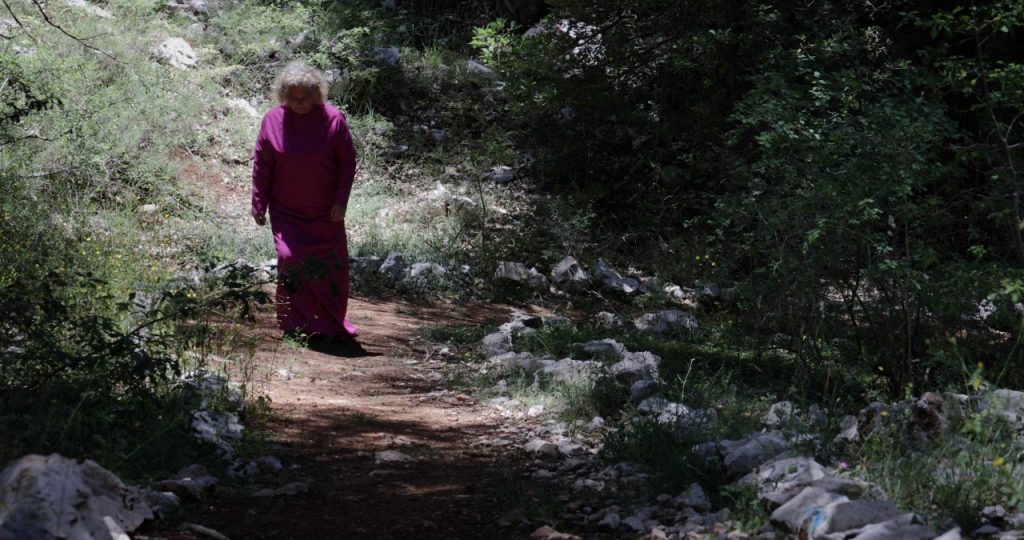 Helen Kirwan works with performance, moving image and installation. In remote outdoor locations she documents her performances of repetitive, absurd and pointless tasks such as stroking decayed plants, measuring the sea with buckets, never-ending walking. She is interested in the textual and visual narratives of journeying explored in the work of Marcel Proust, Walter Benjamin and others. Hence her performative commitment to long journeys across Central Asia, the Caucasus and the Middle East.

perpetuum mobile comprises a montage of Kirwan’s performances of solo walking in the ancient cedar forests of Lebanon, the Ustuyrt Plateau and Aral Sea regions of Uzbekistan and Sylt, Germany: synthesised with other imagery including performances under water, perpetuum mobile’s fragmented, interwoven, repetitive structure offers a poetic, metaphorical approach to meditation on memory. 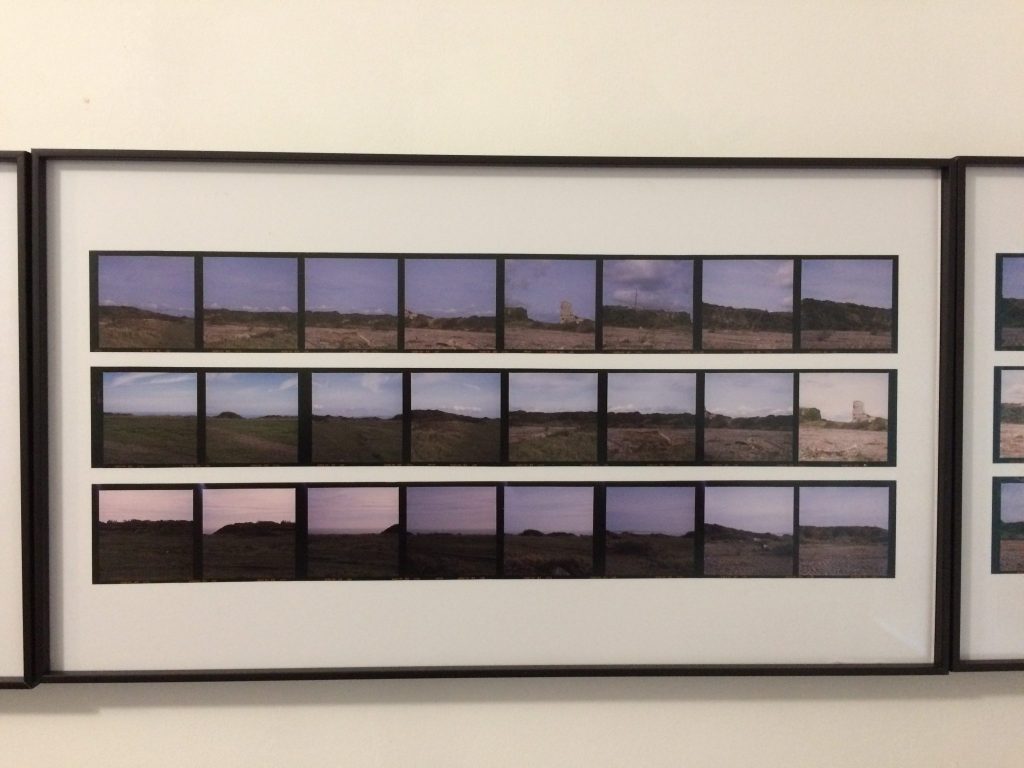 Jane Madsen uses the disappearing material of analogue film. The panorama is made from a continuous strip of 24 frames of medium format reversal film shot on a Hasselblad camera. The panorama reveals the scale of the amount of stone removed from the seventeenth century quarries: Waycroft and Kingbarrow at Portland. Themes of absence are recurrently explored.

These two quarries provided stone for Inigo Jones architecture and later six million tons of stone when Christopher Wren rebuilt London after the Great Fire. The pillar of stone at the centre is not an ancient geological formation, but a marker left by quarrymen to indicate the extent, depth and quantity of stone that was removed from this area of the island. Portland is a disrupted industrial landscape where centuries of quarrying have rendered it an unstable and uncertain landscape.

James Swinson is a lifelong Londoner born in Kings Cross. He now lives in Kennington on the South side of the Thames and has been documenting the shifts and changes in the area for over two decades.

Memory and Desire explores Kennington streets and buildings through a series of double photos (diptych) of the same location taken at different times.