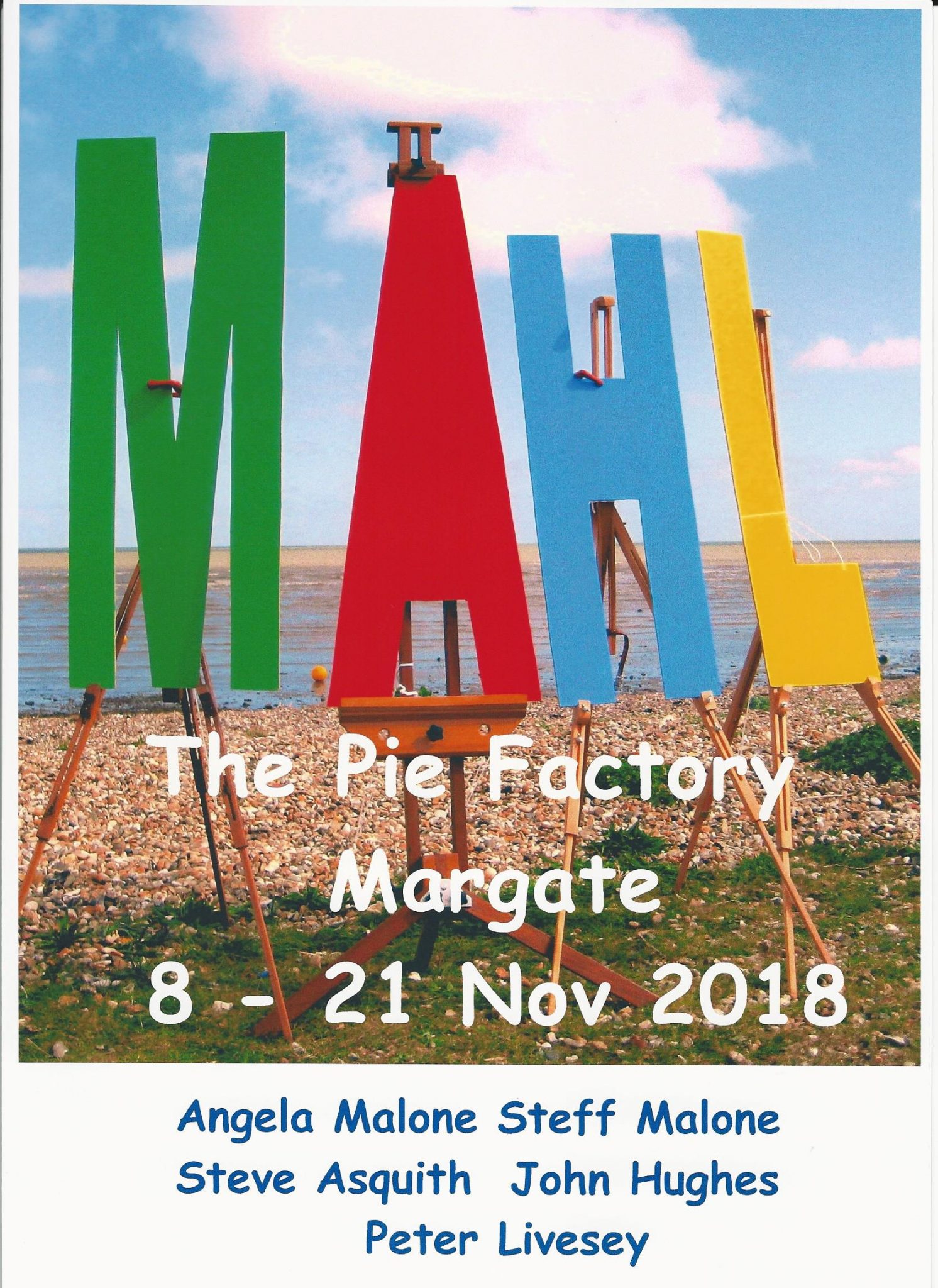 This will be the MAHL group’s 5th Exhibition:  Formed in 2012 they have exhibited in the major London Galleries and bring together a collection of sculptures, etchings, prints, oils and watercolours.

Angela Malone: Originally from New York, Angela studied in Vienna and was awarded the International Fattorini Prize for her medallion design and also the Niagara Falls Prize. Her work has been exhibited in the British Museum, the National Museums of Wales and Cornwall, Cutler’s Hall in London, the Iconic Secession Building in Vienna and in the Museum of Aschaffenburg in Germany. She has completed large murals for Canterbury-based restaurants and has been commissioned to create restorative decoration for the frontage of the Old Kent Market. Margate. She is currently working on the Ashford Snowdogs Project with her daughter, Steffany and is resident artist at Quex, Birchington working on the Dining Room Project..

Steffany Malone: Steff graduated from UCA with a BA (Hon) in Fine Art. She is the youngest member of the MAHL group and brings to it new innovative ideas. Her particular interest is in painting on sheet metal and she is especially talented at portraiture. As well as exhibiting across Kent with the East Kent Art Society and she has held two brilliant shows at the Whitstable Horsebridge Gallery with her mother Angela which were widely lauded. She like Angela is currently working on the publicly commissioned Snowdogs Project due to be opened later this year.

Stephen Asquith: Having studied graphics at the Epsom School of Art, Steve worked in advertising as a model maker and animator. In 2000 he was attracted to etching when he attended the Slade Summer School. Having later decided to study full time, he enrolled on a MA in Fine Art Printing at Anglia Ruskin University, Cambridge, where he experimented with impressionistic and abstract forms. Moving to Whitstable allowed him to return to representational imagery, capturing the essence of the natural world in his own characteristic style. He has exhibited in the Mall Gallery, London and in several of the Printmaker’s Council exhibitions.

John Hughes: John uses watercolour, pastel and oils, the latter being on large canvasses with a remarkable intensity of detail, offering the observer a heightened awareness of the natural world. He is a full time artist and teacher, having graduated with honours in Fine Art from Ravensbourne College of Art and a subsequent postgraduate art teaching diploma at London University. He has exhibited at the RA, and in the Mall gallery with the RBA, the Pastel Society and the Society of Landscape Painters. He has also displayed his work in many other prestigious shows around the UK and in 2013 was invited to participate in the BBC project “Your Paintings” archive.

Peter Livesey: Peter was a GP and Sub Dean to King’s College London, where he developed his interest in verbal and non-verbal communication. He has written a book and medical articles on the subject. He is also known for his paintings of Canterbury Cathedral, many of which have illustrated the official Calendars, and greetings and Christmas cards. From his interest in body language, he was drawn to figurative realism and narrative painting, exhibiting his work at Chelsea Town Hall, the Mall Galleries with the RI and at Bankside with the RWS. He has recently been commissioned to illustrate the Cathedral’s 2018 Calendar, Advent Calendar, Notecards and this year’s Christmas Card. His work is in collections worldwide. He has also had his work illustrated in a biography about the celebrated American Artist Maxwell Parrish published in the USA.