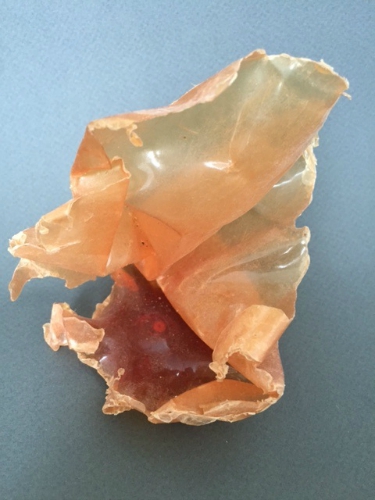 Things That Are There brings together the work of five artists (Tom Banks, Sam Hodge, Mark Sowden, Matthew Swift, Ana Vicente) who find inspiration from observations of the environments in which they live.  Their concern is with details and views that normally go unnoticed.  There is an almost anthropological element to the findings each artist makes.  In this sense landscapes concern these artists not as verdant representations of grand vistas but as sites of investigation that allow particular encounters to occur.  Each artist is located in a specific landscape that nourishes his or her practice.  These range from the Kent and Sussex Coasts to the streets of East London and the interior of a domestic living space.  Their practices include painting, drawing, performance, installation and sculpture. Things That Are There creates a meeting place where each artist, mapping particular geographies brings their divergent findings and places them alongside each other, for further examination and consideration.

Cycling or walking along the streets of East London Mark Sowden notices objects displaced. Items thrown away and left outside become the subjects of his investigations. He photographs these objects and sometimes takes them away so he can work on them. In his studio the ephemera that he has found is handled in ways that shift its status in subtle ways that bring some things closer making them more tangible while pushing away others making them more elusive. Boundaries between representation and invention, image and object become blurred, as the viewer is encouraged to question what it is we see and how we are seeing it.

Sam Hodge grew up on the Kent Coast nurturing a fascination with the ebb and flow of the tide and the erosion that occurs where land ends and water begins. The landscape of mudflats and shingle allows her to comb for washed up and worn objects that could become the content of a painting or a print. The pavements of Hackney, East London, where she now lives, have become parallel corridors for scouring and combing, where the flotsam and jetsam of urban life leaves a trail of worn and broken objects. Her work explores the relationship between the natural and manufactured as well as processes of selecting, collecting and interpreting images.

Ana Vicente observes the routines and repeated mundane movements of daily existence. What can be seen as the motions of banal ordinariness she sees as individual encounters each with something worth noticing. Her aim is not to display a visual aesthetic but instead to present, in almost scientific terms, what she has discovered as she moves through a moment in time. She uses various ways to present her results, they can be pinned to a wall, displayed in cabinets, videoed or performed. Work is not predetermined but comes from playfulness and the physical process of making.

Suburbia can be used to describe a certain type of ordinariness. It is in a nocturnal version of this landscape in Hastings that Tom Banks seeks out people-less streetscapes, singling out trees, buildings and objects as his subjects. Artificial light is left to illuminate these night-time scenes: whether from within a home through glowing windows, stringent orange from street lamps or a harsh flash from a camera, all collude to create an eerie sense of uncertainty. His meticulously painted surfaces edit out much background detail but leave specific objects in place reminding us of the lives lived there in daylight hours. The paintings demand us to find a narrative that could fit these subtly unsettling scenes.

For Matthew Swift towns and cities on the edge of land are an ongoing inspiration for his work. They contain a potent mix of, on the one hand, dreams, hopes and aspirations and on the other, decay and worn surfaces; there is something intrinsically human in this contradiction. Photographs he has taken of architectural details and forgotten corners become the starting points for collages and assemblages that move out into the gallery space. His aim is to open up a reconfigured reality to the viewer allowing for possible reflections of how specific built environments can change the way we see and feel about the world around us. For this exhibition he is producing a new series of pieces inspired from photographs taken around Margate.

For more information about this exhibition, please call 07734103721