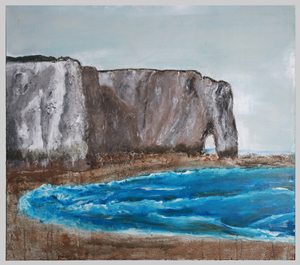 Work:About:
Born in London 1946 Alan recently moved to the east coast where he fell in with artists of great talent and extraordinary patience. Surrendering his last few pennies on a studio, Alan pursued the creative urge to gain expertise with acrylic, wire, coffee makers and daytime television.
The lack of reasonable reception and a TV licence has forced him into accumulating a body of work which has covered most of the available wall space in his home and become a walking hazard in the corridors and the studio and so the idea of an exhibition was born.

For me, art is very simple. You get an idea, you submit it to paper, then canvas, then most of the time to the bin. You continue this process until you run out of ideas, paper, canvases, bins or patience.

On very rare occasions ideas spin out of the above cycle and end up being stuck on a wall and now two of the ideas are in the exhibition.

When I was at the City Lit I uncharacteristically signed up for a Foundation Course in Art, where I did a lot of wire pictures and sculpture. Characteristically I totally failed to complete the course due to a genetic creative bypass and the astonishing demands of the course to turn up at the ungodly hour of 10:30 (a time I had, up until then, not realised appeared twice in a day.)
Immediately I left London for the east coast drawn by earth, wind, water and fireworks.
But I continue to wire my time away
Hence the Series “Rise and Fall”